This is a breakdown of all the day to day equipment I carry/use on a day to day basis. This list will be updated and tweaked over time.

The laptop I use for contracting. My 9-5 Machine. I’ve used Macs at work when permitted for years. My work flow is catered around Macs & I prefer them. I specced this high because I wanted it to last & run VM’s as I develop & test projects.

Hardly a surprise based on my laptop choice. This is my Camera, my anywhere internet, my fitness coach & a million other uses. For better or for worse it’s the device I check first thing and last thing in the day. It’s an iPhone 🤷‍♂️ You kinda know by now what you’re going to get.

More and more it’s becoming my 5pm - Bedtime device. Great battery power, light weight. Still used more my me for consumption and light personal creation (Blog writing, Photography etc) than a true ‘real’ workhorse, but is becoming more capable with each generation and software update. For a Keyboard I now use…. 👇

My Smart Keyboard developed a hardware failure. Something Apple appear to have sneakily admitted. I decided instead to replace it with this cool solution. It’s a case with a sticky back to attach a standard Magic Keyboard to. For cover I now have a Saddle Brown Leather Smart Cover

It makes such a difference to weight to have a keyboard you can still easily deploy. I much prefer this solution.

Recently upgraded from my Series 0 after 3 years service. the 3 turns the device into what the 0 promised it would be. Snappy access to base information and notifications. I think it’s great. Watch is paired with 👇

When I wore a traditional watch, I always used NATO style straps. Apple does Nylon bands but they’re not exactly what I want. Southern Straps is closer to a traditional NATO strap style and is awesome quality. I now own several different colours but the green is my daily driver. Their support is fantastic and they quite often put extra bands in your order! 🤫

Not the fanciest, but it’s low maintenance. I use this for backups of family Macs using Time Capsule, and for Plex storage.

Every network engineer has a console adapter. I decided to invest in a wireless one due to the volume of site visits I do that usually require consoling onto numerous devices. I’ve never done a job with another Network Engineer where they haven’t noticed this, and asked where I got it. Everyone is impressed. As a bonus, you can plug it into a wired network and broadcast an SSID you can connect to as well! Switch & WLAN access all in one plug! 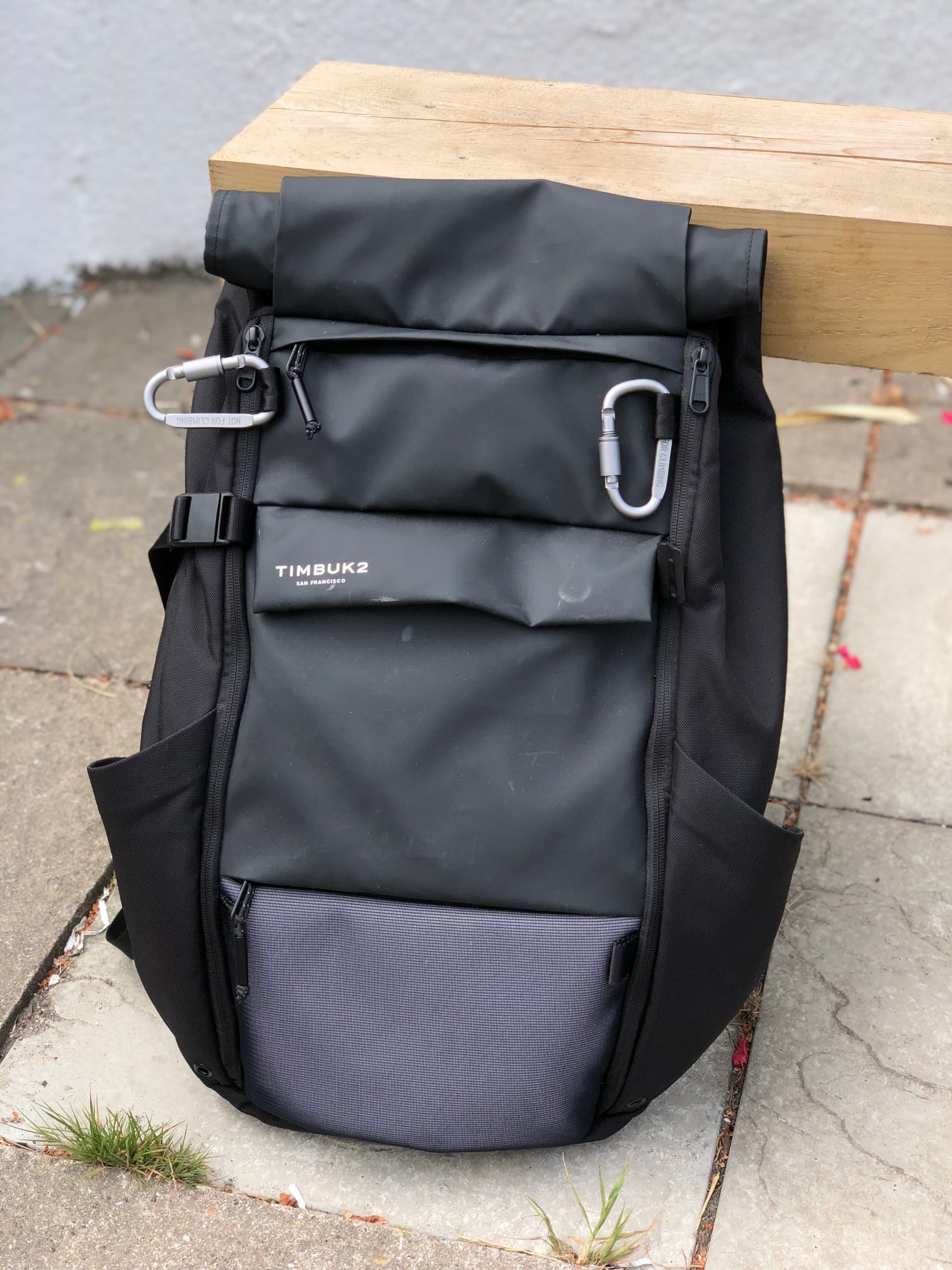 I’m pretty obsessive about finding the perfect backpack. I used to have a satchel but gave up when I was getting back & leg pains because my pack weight wasn’t evenly distributed. I wanted a backpack that could serve work, casual use and travel. I originally tried a Poler Rolltop 2.0, but found it leaned too much towards casual rather than travel or work.

My original criteria was

This bag cemented the my love of a rolltop bag. the versatility to adjust bag size & how useful they can be is awesome. When I upgraded to the Clark, It was because

✔️ It was harder wearing material

✔️ As well as a Rolltop, it is horizontally expandable for compactness when not loaded up

✔️ A lot more pockets/sections for my gear

And I think I’ve now reached backpack Nirvana. I can’t think of any reason now I would try another bag. If I ever loose/damage wear out the Clark, I think it would be replaced with another Clark. it’s that good.

I use these as general ‘walking around’ headphones and for conference calls. They’re great general purpose headphones. I like the utility rather than the sound quality, but they’re ok. If you’re on the fence, get some. Convenience wins out.

My premium headphones for long journeys or static periods. I use them on everything from my Laptop & iPhone to my TV and games consoles. They’re huge. They’re comfy. They sound great.

Now Bowers has discontinued them (With no direct replacement) I don’t know what I’ll do when they die. Bowers PX perhaps, but they’re smaller and reviews say they’re less comfy. 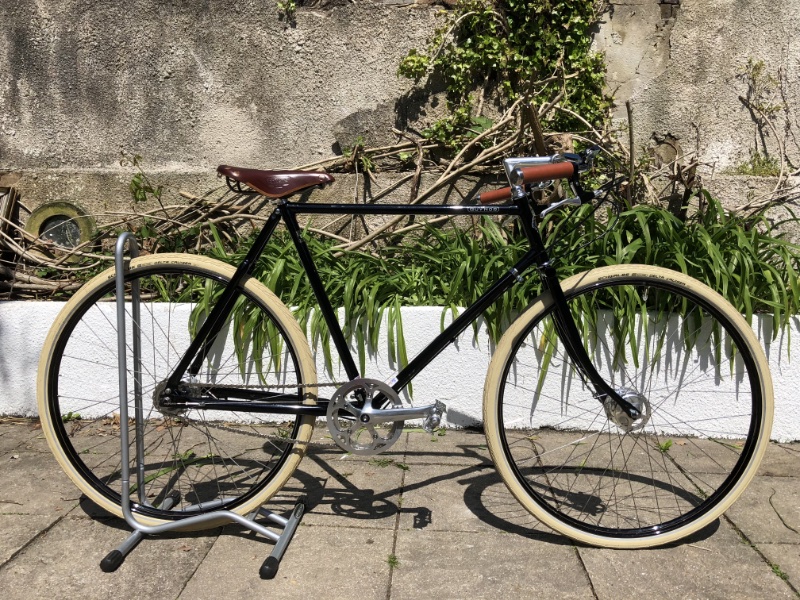 A total blind passion buy. I make no apology for it. Sometimes you just buy something because your heart tells you it wants it.

I wouldn’t do any hard riding for it. It isn’t a daily driver, but for summer rides around Dorchester & the surrounding countryside it’s the perfect bike. Guaranteed also to look splendid parked outside a pub 😉🍻

My camera is my iPhone. Over time I find myself doing most of my edits on iOS vs MacOS.

Great put together simple photo editor for iOS. Every basic tool you can imagine well crafted. Supports RAW and integrates with a camera app called…

As the native iOS camera still doesn’t support RAW, you need a 3rd party app to shoot RAW. Halide is more than a basic app wrapped around unlocking an OS feature though. It has a great well planned GUI vs other apps out there and is well supported.

I don’t love the iOS version or its GUI, but it has a great heal tool for when it’s needed. That said, if Darkroom added healing it’d be deleted in a hot minute.

Switched from Omnifocus. Would never look back. To me this is the best implementation of GTD/To Do Lists I’ve ever used and fits me pefectly.

Visio that doesn’t suck (as much…but this is not a truely great app.) I want to find time this year to try and use something else that’s out there

Switched from Evernote last year. Now Things has a URL Scheme I can embed links for Projects between Bear & Things for tracking. Great Markdown. Still has a way to go in some areas. I’d love better drawing support as well.

Hands down the best most flexible editor I have ever used. Microsoft have done amazing things. It’s awesome.

My previous Text editing love. I keep BBEdit around because it excels at text manipulation in some ways that VSCode can’t match. Namely Diffs and real compex find & replace manipulation. It’s gone from being a Swiss Army knife in my kit to a particular scalpel, but still great.

I’m fairly new to MindMapping but have found it pretty useful for a bunch of projects I’ve applied it to so far. I’m still getting used to all the concepts but it definitely has helped me break down complex multi-part projects into different areas (Such as tasks, planning, who’s involved, what devices I need etc) to give me a ‘big picture’ view. For Ansible projects I’ve used it to map out and keep track of variable and sub-variable names in scripts as well.

I worry about the long term support now since VMWare fired the whole development team, but it’s good and has nice features. If it truely does die the death I’ll probably switch to VirtualBox

Goes on all my Macs. Great quick info to CPU, Disk and Bandwidth usage.

Now with weather! 👍 But for an extra monthly fee. 👎

I like it less and less as time goes by. I’ve never ever had a response to a support request either. Reeder is basically like the Groundhog where it comes out every year with an upgrade and spring arrives early and then that’s that until next year. But it’s the best solution for a MacOS / iOS RSS reader I can find. I like other clients more, but they don’t have MacOS + iOS versions.

A requirement for corporate living. I use Outlook for my work based email. Excel/Word as required.

IOS Versions of MacOS apps I use are

And iOS Specific is

I’m not a drawer. I’m not an artist, but I am a scribbler. Especially when working through thoughts and planning out projects. I like to draw out Networks as I work on them quickly without having to care about neatness. Switched from using Paper by 53 due to some frustrations of how they keep changing the app and the sub model/features.

A magic way of converting paperwork to PDF. Fast and well thought app. All my private/Personal paperwork gets scanned + converted.

My love of MarkDown continues. I use it on the ipad instead of Bear for long form writing (Such a this page here!) No subscription, has all the features I need and is simply presented.

Remotely access my Mac. I wouldn’t buy the MacOS version (I think its overpriced vs the in-built MacOS tools for my usage) but on iOS it’s a great experience.

A necessary evil. Not the greatest app and not always updated promptly, but it does what it says on the tin.

Good SSH terminal from a good developer. I must admit though the recent fate of their FTP client for iOS + how niche this product must be makes me worry about its future. I’m not a coder, so I don’t need anything more bloated.